Welcome to Arcade Direct!
Home » Blog » The Best Arcade Games of All Time

The Best Arcade Games of All Time

The Best Arcade Games of All Time 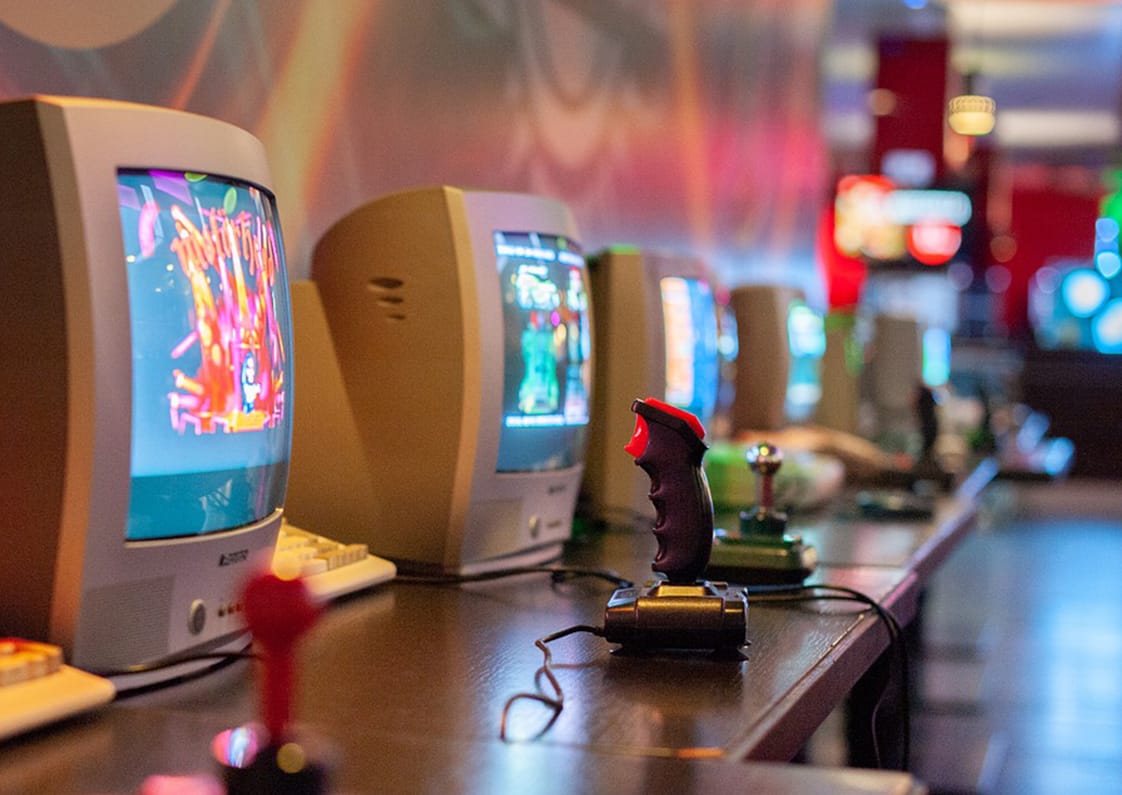 A brief history of the classic arcade

We all remember the feeling of awe as we ran into the arcade for the first time to see what it had to offer. The excitement on the journey to play our classic favourites, the buzz of playing on the new machines and the opportunity to hang out with friends was the perfect way to spend an evening!

Wonder and amazement in the eyes of children and adults, as they were left free to roam the virtual worlds handed before them. To take you back to the good old days of gaming, we have created a list of the best arcade games of all time. 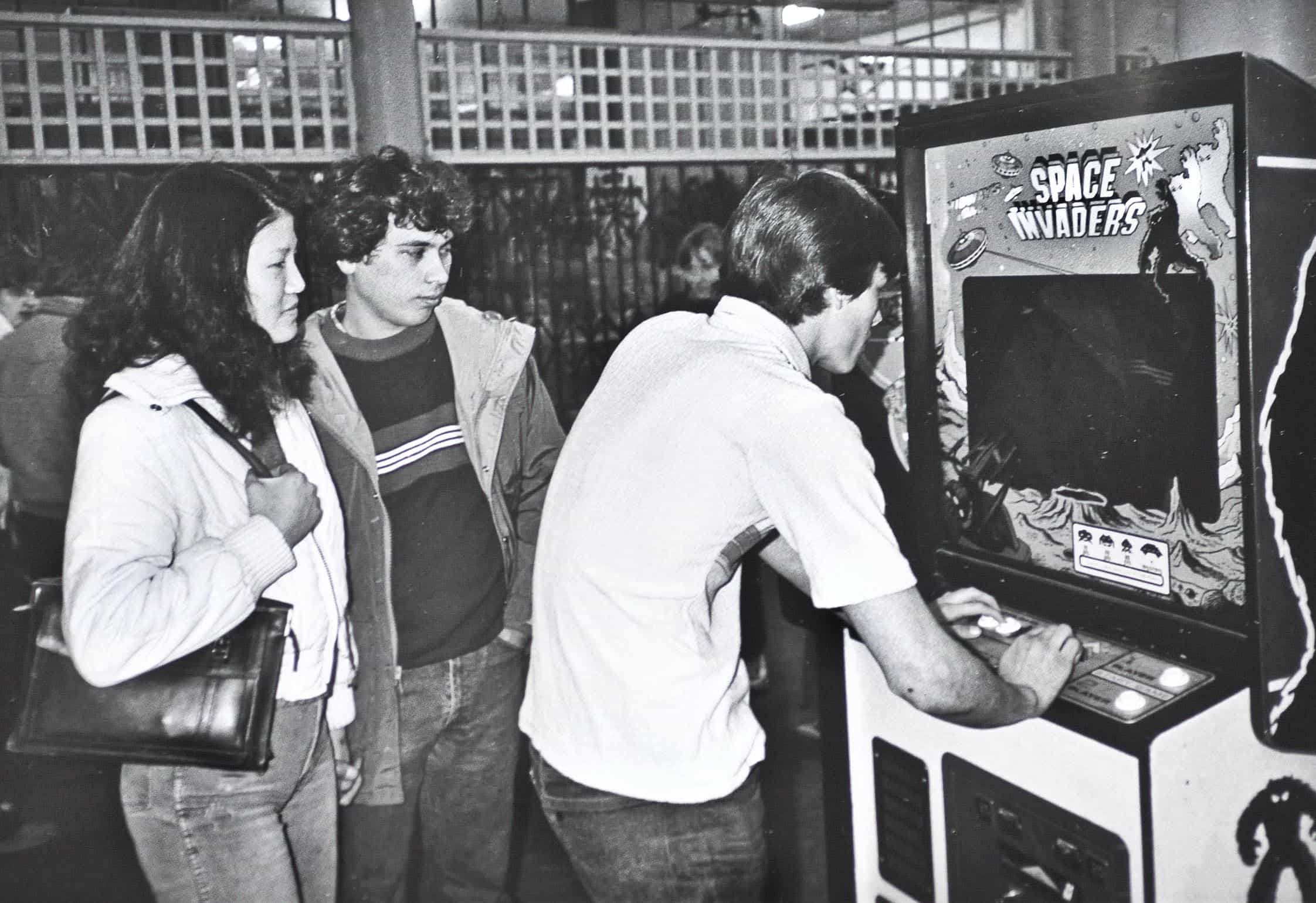 What made these games so good?

What made those retro arcades so amazing was that they provided a place to switch off from the real world, allowing people to lose themselves in another reality. It was a popular place for friends to meet and hours would pass in the blink of an eye. Parents would drop off their kids on a Saturday morning, knowing they would be entertained for the whole day so they could get the housework done! There was no rush for the gamers to leave and nothing was going to get in the way of saving the earth from invading aliens.

Arcade Games throughout the decades

Whether you like to play the best arcade games of the 80s or 90s, we have rounded up the best games from each decade to make sure you don’t miss out on all the favourites!

Spending all day in the arcade with all the loose change you could find made sure it was possible to play everything at least once. There was always a kid hogging your favourite game so the trick was to arrive early to avoid disappointment! Arcade games have changed a lot in the last 50 years and the styles of gaming are much different too! Have a look at our blog posts on the history of arcade controls or how multiplay games have evolved to bring back some memories.

What are the best arcade games?

We all had our go-to games and wouldn’t give up until our name was on that high score board. What was your favourite? Maybe it was the classic Pac-Man or Asteroids? Either way, come with us on a trip down memory lane to remember all your favourites with this list of the best arcade games of all time. 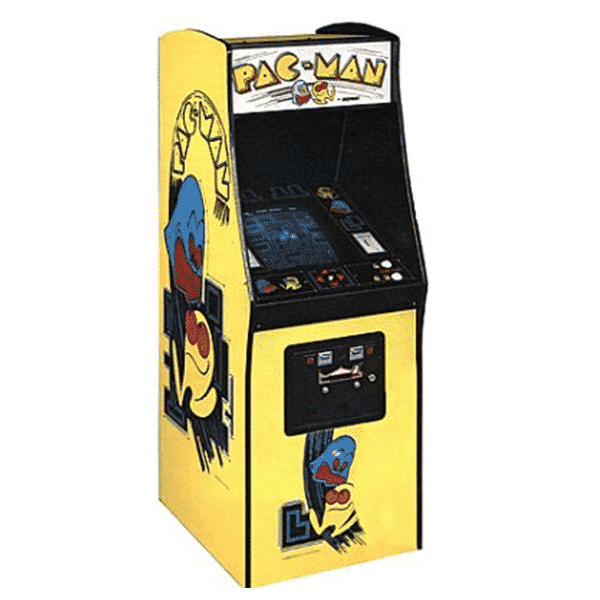 Released by Namco. This classic maze game has got to be in the top three if not the number one classic arcade game.

Eat all the dots to move to the next level.  Get caught by one of the four ghosts, lose a life. Lose them all and it’s game over.

Pac Man is probably one of the first things you think of when you hear the words “arcade game” and it’s no surprise. This seriously addictive game  is very fun to play. 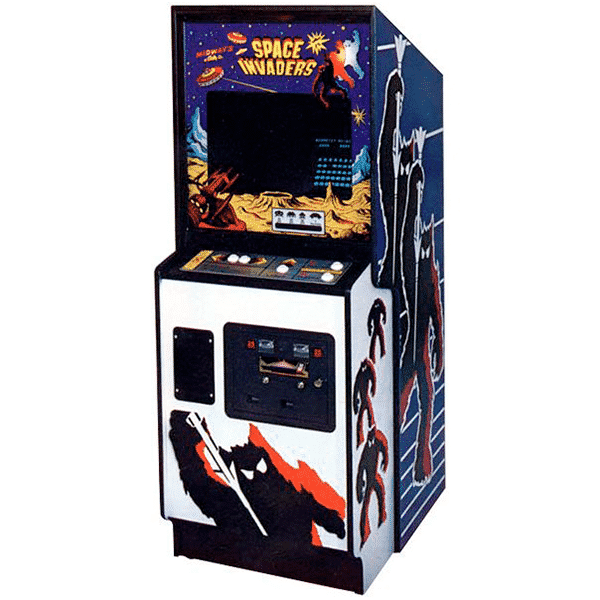 Developed by Taito in 1978, this classic game is one of the all time favourites.

Shoot all the aliens and protect the earth. The aim is to shoot them all before they make their way down to the ground. If they reach the ground, it’s game over..

Such a classic game which is super addictive. The responsibility of saving the earth makes this more captivating  and the game play keeps you hooked.

Hire the Space Invaders arcade machine from £295 or buy this machine for £2,575.00 from Arcade Direct today! 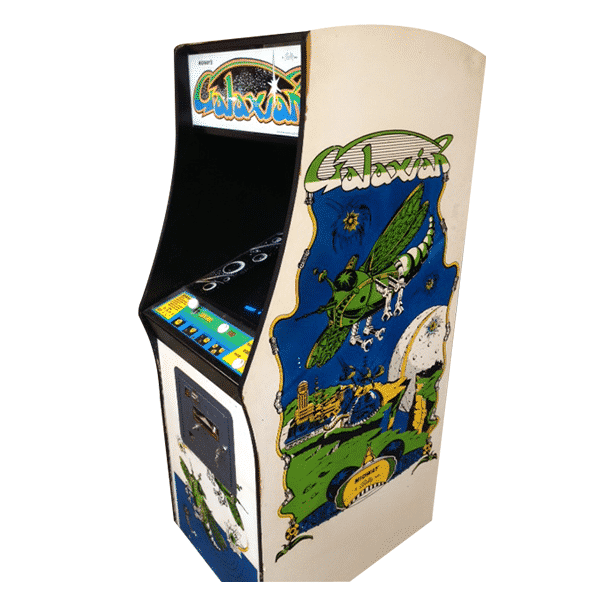 Another by Namco. Very similar to Space Invaders. A lot of games were created like this because they are very addictive and fun to play.

Take control of your own spaceship and survive waves of attacks from aliens by shooting them down. 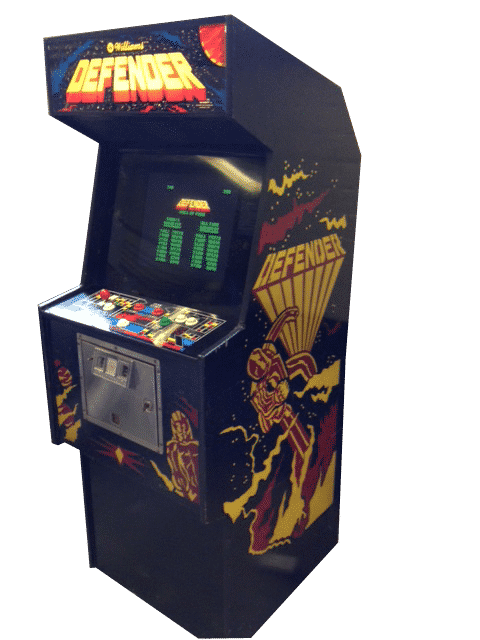 Not-so-surprisingly another shooting game, but this time released by William Electronics, from the Golden Age of Video Arcade Games.

Failing to protect the astronauts results in an explosion and the planet to be populated by mutants.

Survive the waves of mutants to progress and restore the planet, fail this and lose all three ships you command and it’s game over.

Hire the Defender arcade machine from £295 or hire our Pixels Party Package from Arcade Direct today! 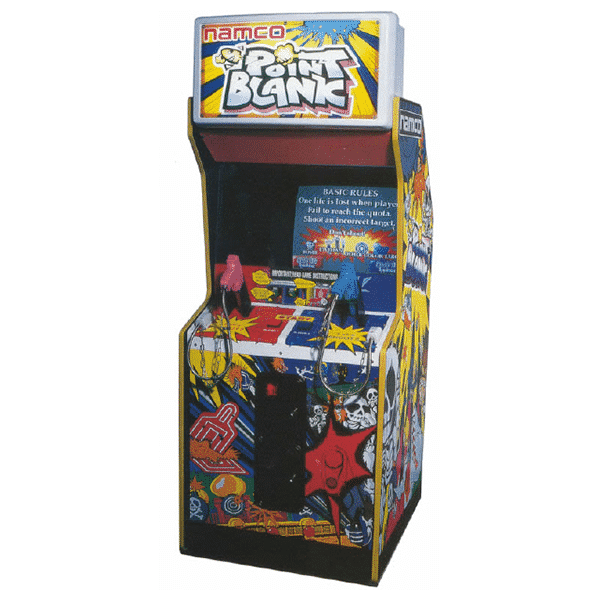 Shoot on-screen targets but avoid the bombs. Different levels of difficulty are played depending on how good you are at playing. This classic shooting game is one all the family loves.

Hire the Point Blank arcade machine from £295 or buy this machine for £1,950.00 from Arcade Direct today! 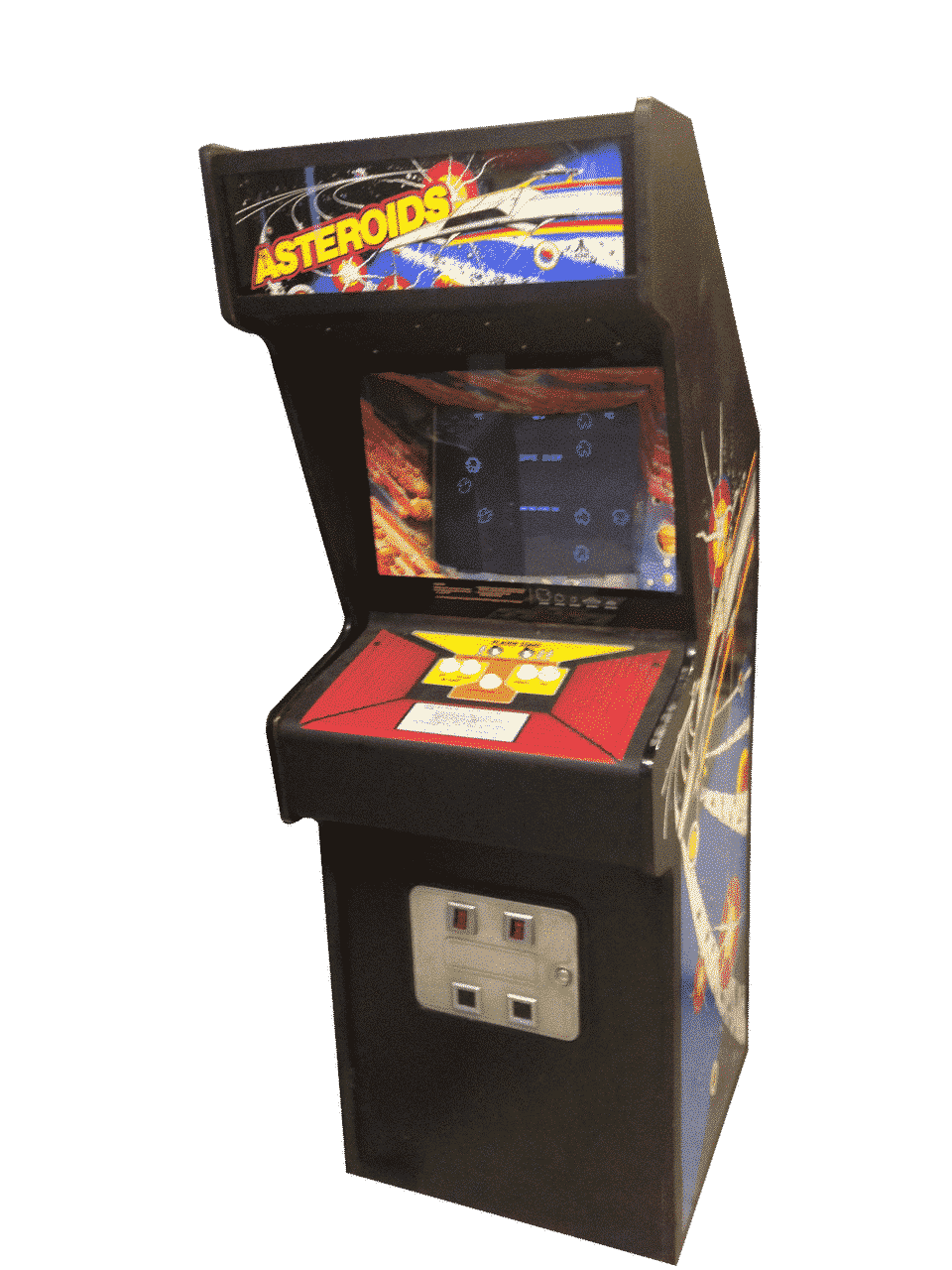 Arcade game powerhouse, Atari, developed this game in the 1970’s. This genre of game was very popular with the simplistic game plan but the levels intensify as you move up.

The simple games were very popular, they require little thought but are really addictive for players and you can easily lose time playing this game.

You must destroy asteroids and saucers while controlling a spaceship by shooting them.

Buy the Asteroids arcade machine from £2575.00 or hire our Pixels Party Package from Arcade Direct today! 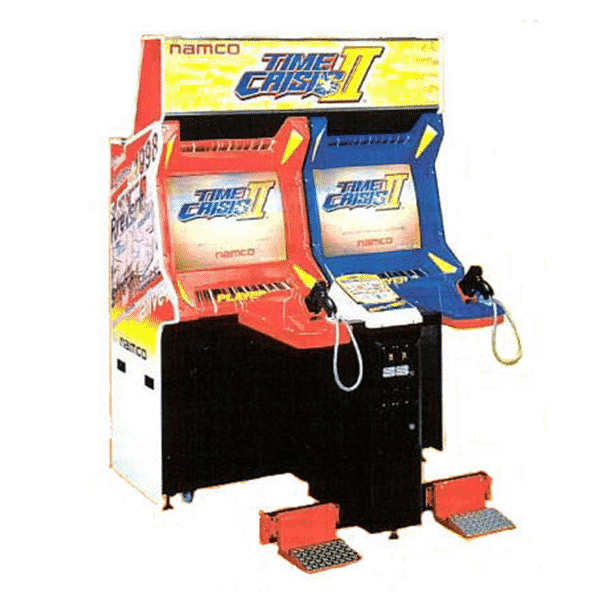 Another one by Namco, this game features a  light gun machine but this time with added pedals which really add another level to this game.

Defend and protect the Earth from a villain who is planning to launch a nuclear satellite.

Hire the Time Crisis II arcade machine from £395 or buy this machine for £3150.00 from Arcade Direct today! 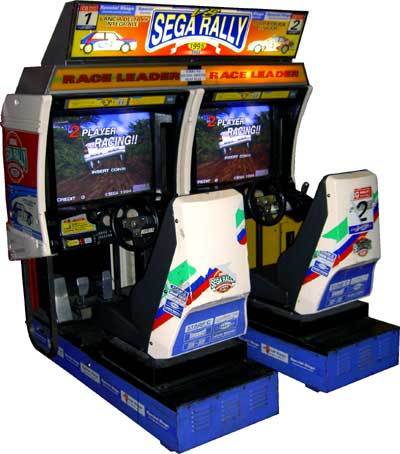 Developed by Sega, sit in the driving seat and race it out for first place on the rally tracks.

Racing games are one of the most popular games and usually require two or more players so you can have a little competition.

The console usually has a seat extension which you could sit in to feel like you are actually driving the car.

The immersive experience made this simple racing game a hundred times better.

Control the steering and the pedals while you race it out to earn first place. 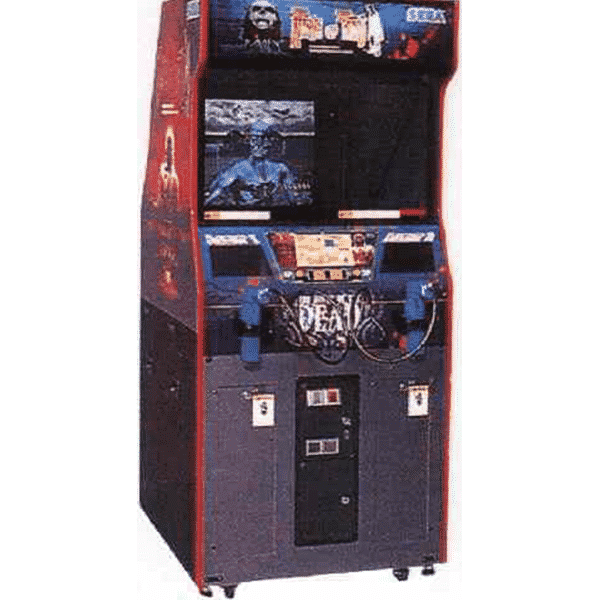 A shooting game created by Sega in 1996.

Clear out all the enemies by shooting them before being able to move on to the next area. There are boss levels at different points in the game.

The original game also included civilians you had to rescue which added another level to this game to make it interesting.

Hire the House of the Dead arcade machine from £295 or buy this machine for £2,295.00 from Arcade Direct today!

These multiplayer dancing games were very popular because of their immediate competition.

Challenging your friend to a dance battle in the middle of a busy arcade or lining up for your turn was what it was all about. The anticipation to get all the moves right, get the highest score and beat your friend at the battle.

Follow the steps shown on screen by stepping on the correct placement on the floor to gain points, the one with the highest score at the end wins. 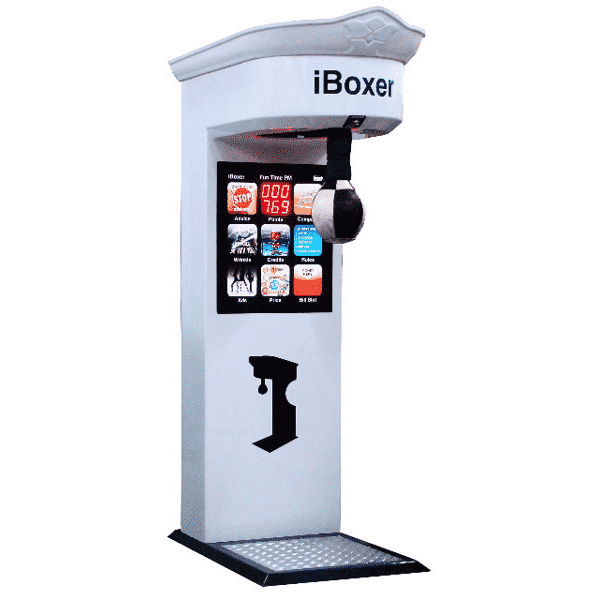 These machines allow you to test your strength as you punch the bag and compete against friends to see who is the strongest. A classic game which is still widely loved today.

Punch the bag as hard as you can and see your score. It’s all about who packs the best punch!

Hire a Boxing arcade machine from £395 or buy our boxing machine starting from £3245.00 from Arcade Direct today!

Hire or Buy an Arcade Machine

So there we have our short list of the best arcade games of all time.

There’s no doubt these games brought us all joy and happiness while we played them and the nostalgia that comes along with these games in unreal, it really does bring back the memories of your childhood and the fun you had.

Not only do Arcade Machines help to get you together socialising with friends, they are also a great way of creating a unique environment as part of a corporate event or special occasion. It is also possible to create a bespoke, fully customised machine which provides a fantastic talking point and helps to create a friendly competitive environment amongst colleagues too! 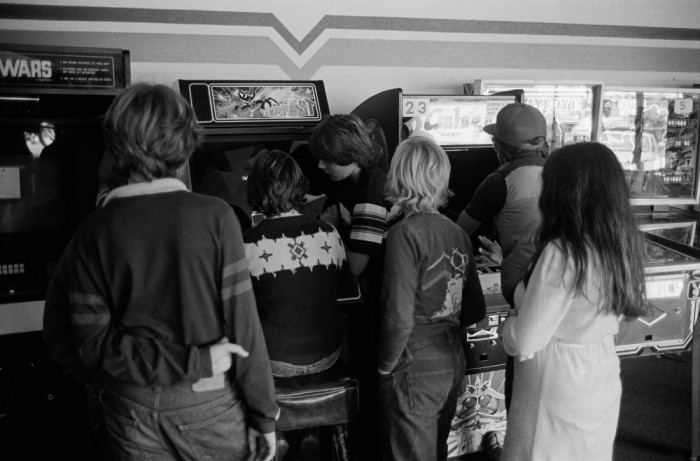 See one or two games you wish to play again, maybe you have a party coming up with an 80’s theme? Well here at Arcade Direct, we hire out a range of classic arcade games. Take a look to see if you find your favourite. 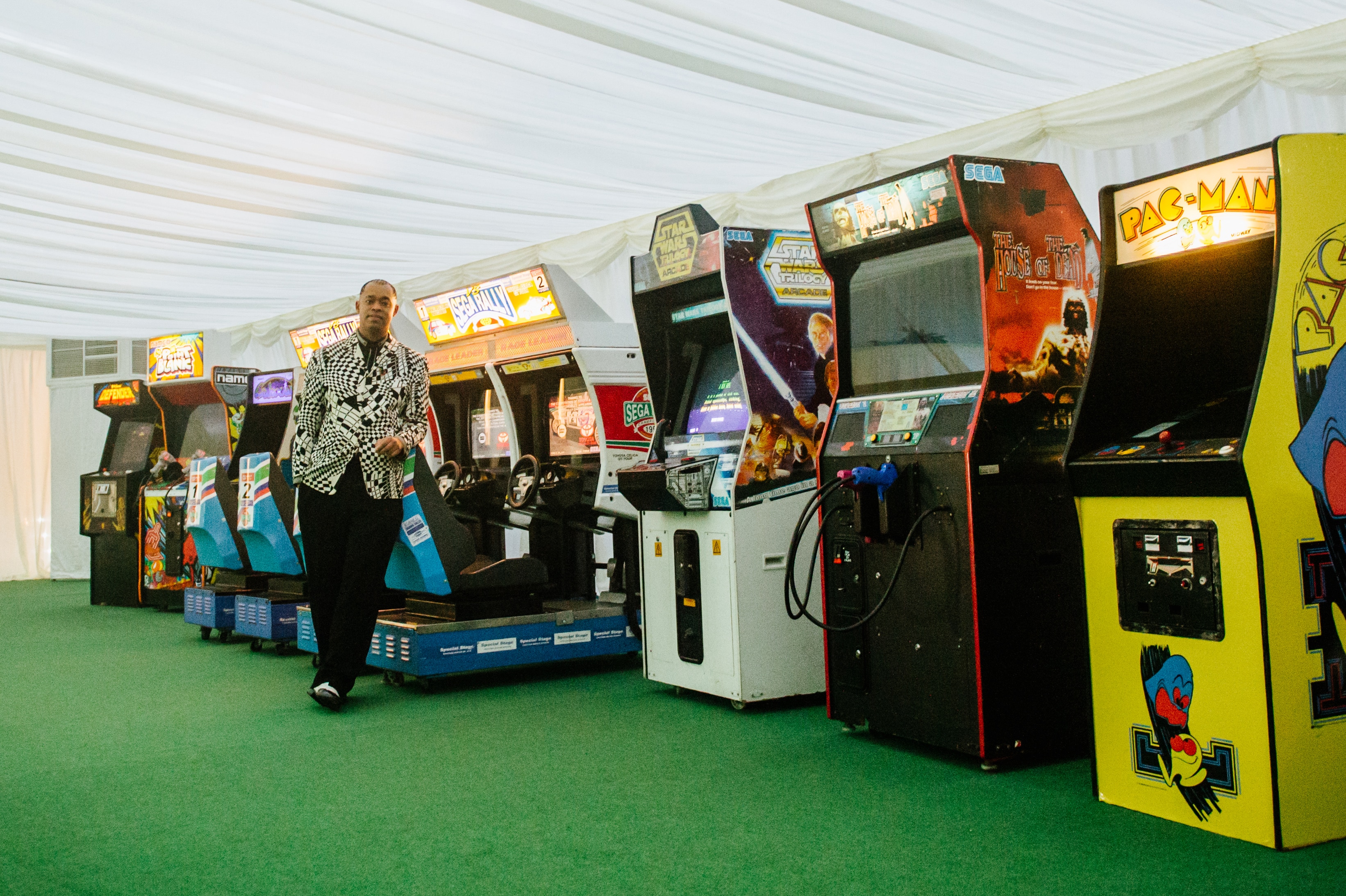 It is always good to reminisce on the good old days. Arcade Direct can bring those memories to life and if you are looking for some inspiration on the best arcade games to hire in the UK to keep you entertained, you can take a look here.

For more interesting tips and information on Arcade Games and Machines, you can follow us on social media here for updates!

The Best UK Gaming Events, Expos and Conventions 2019
Top 10 Must-Haves for a Mancave